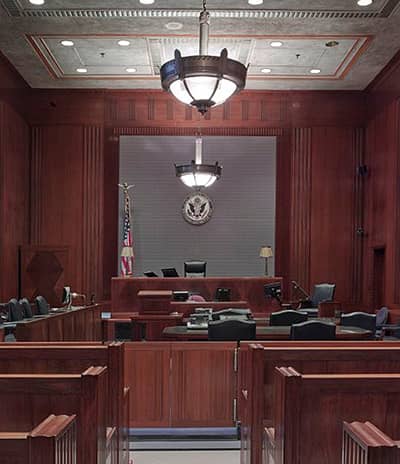 The Constitution requires that every person accused of a crime shall have the right to a public trial. If the criminal offense that is charged carries a possible sentence to jail, then the accused also has a right to trial by jury. The jury members must be selected from the jurisdiction in which the crime was committed. A criminal trial in Boulder will have jury members that reside, and vote, in Boulder County.

Voir Dire is the process of jury selection. Members of the community are summoned for jury duty, and appear in the courtroom on the first day of trial. This “pool” of jurors is then reduced in size, as attorneys from each side of the case decide which pool members will serve on the jury. This is a critically important part of the trial. Some potential jurors may not be able to follow the law due to their personal beliefs. These jurors must be found and eliminated from the pool in order to avoid injustice. For example, some people believe that if the police accuse you, they must be correct simply because they are the police. This is considered by law to be an inappropriate bias, and a Boulder criminal defense lawyer can remove such a juror for cause. In this way, jurors with bias that will prevent them from fairly balancing the evidence are taken out of the process entirely.

Voir Dire is also an opportunity for both prosecutors and defense lawyers to develop a relationship with the jurors, and get a sense of which jury pool members are most in line with the views that will support their side of the case. Because first impressions are essential, it is important for the attorneys to establish a good rapport with jurors during jury selection.

The prosecution and the defense will each give an opening statement. This is an opportunity to discuss the facts that will come out later during each side’s presentation of evidence. The jury’s attention is very focused at this point in the trial, because they have not been in court for very long yet, and they are curious what the case is about. Getting the jury to lean your way early on will shape how they view the evidence to come.

The Presentation of Evidence

Closing argument allows the attorneys from each side to highlight all of the evidence that supports their side of the case. The attorneys are allowed to make more elaborate arguments than they are allowed to make during opening statements. Closing arguments are the attorneys’ final opportunity to convince the jury of their case, before the jury will begin deliberating on the verdict. During the closing, each important piece of evidence must be fit into the attorney’s overall theory of the case in order for the jury to be persuaded.

At the completion of closing arguments, the judge will provide instructions to the jury. The jury will then be escorted by the court clerk to a private location to deliberate on their verdict. Deliberations can last a very short time, or a very long time, depending on how much disagreement there is among the jurors. When there is disagreement for an extended period, the judge may advise the jury to continue to try and reach a verdict. A verdict of guilty must be unanimous, and if a single juror refuses to reach a guilty verdict, there will be no conviction. If the jury fails to reach a verdict for an extended period of time, the judge will declare that the jury is hung.

If the jury reaches a unanimous verdict, they will report back to the courtroom to state their decision. The jury foreperson will speak for the jury as a whole. The attorney for the losing side will be allowed to confirm with each jury member that the verdict as stated was, in fact, their individual vote.