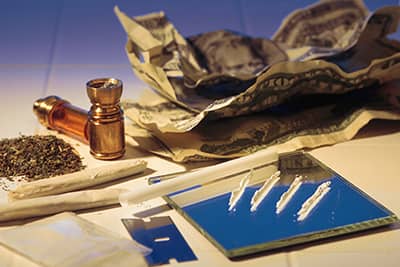 Drug offenses are very actively prosecuted in Boulder and throughout Colorado. With the student population, and the progressive culture in Boulder, drugs are used and distributed widely in this jurisdiction. The criminal charges that result range between minor and very serious. Possession of drugs is substantially less serious of an offense than is sale, manufacturing, or distribution of a drug. With the help of an experienced defense lawyer, someone accused of drug possession may get leniency from the court, and may even be able to avoid jail. Those that are arrested for more serious charges may be able have their sentences minimized as a result of careful negotiation.

Kevin Churchill has represented those charged with all levels of offenses, including those involving marijuana, cocaine, ecstacy, mushrooms, LSD, methamphetamines, and many different prescription drugs. Former clients have faced charges including simple possession, possession with intent to distribute, manufacturing, cultivation, sales, and prescription drug fraud.

The seriousness of a drug offense is determined by the type of drug and the quantity. Drugs are categorized into “schedules.” The lower the number of the drug’s schedule, the more serious the offense. For example, cocaine is a Schedule Two controlled substance in the State of Colorado. However, mushrooms (psilosybin), LSD, and most narcotics are classified as Schedule One controlled substances. Possession or sale of a Schedule One substance is a much more serious crime. This is true both because the statutes dictate so, but also because the judges and district attorneys take a much tougher stance with cases involving Schedule One substances.

If an adult is charged with a drug crime in which minors are involved, there are increased penalties. Examples include cases involving sales to minors, use of minors to distribute drugs, or when the drugs are sold near a school. Additionally, any of these situations would be considered by the judges and district attorneys to be a serious aggravating factor, meaning that they are less likely to bend toward leniency.

Defense of a drug case requires the criminal attorney to evaluate the legality of the police search that led to the discovery of the controlled substance. In the event the police violated your Constitutional rights when they conducted their search, the court must suppress any evidence found as a result of the illegal search. Your defense attorney will file a legal motion to suppress the evidence. If you win such a motion, it may result in your case being dismissed. In other cases, it merely weakens the prosecution’s case, possibly causing the district attorney to offer you a better plea deal.