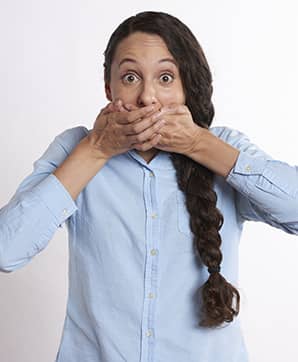 If you are suspected of a crime, the police will want to speak with you and ask questions. The reason for this is that your statements to them, and your answers to their questions, are often critical evidence for the prosecution case against you. It is important not to speak with them, whether you are guilty or innocent.

Many times, and for various reasons, the accused makes the mistake of cooperating with the police and answering questions. Being confronted by law enforcement is an intimidating experience, and most people feel like there is no other option than to speak when they are confronted. In other cases, the accused may believe that he can talk his way out of the situation, or that cooperation will be looked at favorably, and allow him to avoid being arrested. However, the reality is that if the police come to talk to you, they already know whether or not they are going to arrest you. They will not let you know this, because they want to talk with you first.

Trained officers are well aware that once they place you under arrest, you are less likely to give them the statements they are looking for. They also know that they can take advantage of the fact that you want to avoid being arrested, and that you will make statements as you deny the allegations, or answer questions in an attempt to look cooperative. In many criminal cases, the accused will be questioned and then arrested. In this situation, the police knew they were going to arrest the accused before the interview, but did not disclose this. The statements made by the accused, as expected, did not have the desired effect of making the police go away, and will be instead used against the accused later in court.

If I am not guilty, what’s wrong with talking to the police?
In order to answer this question, it must first be pointed out that innocent people do get convicted of crimes. Since the advent of DNA technology, countless defendants have been released from prison because they were proven innocent later through DNA testing. All of those defendants were at one time found guilty by a jury that believed a false prosecution case. Even when you are innocent, you should be very concerned about the “evidence” against you.

Statements that might seem unimportant can be used in the larger picture of the case against you. For example, simply telling the police that you were in Boulder on the date of the offense may fill in a missing piece of information that they did not have before you said it. In this subtle way, almost anything that you say can be combined with other known evidence to paint the picture that you did something when you are, in fact, innocent. Additionally, the exact words that you use, and how you say what you say may not make it into the police report accurately. You may be misquoted and misunderstood. However, you can’t be misquoted if you say nothing. Let your Boulder criminal defense attorney do the talking for you later.