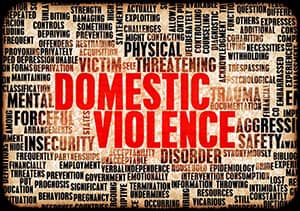 False allegations are very common in domestic violence cases. Alleged victims are frequently not victims at all, and use the court system to exert power over their partner by calling the police and telling stories. An experienced Denver criminal defense lawyer can help you avoid a conviction based on a false report.

Photograph Your Injuries
If you have been charged with a domestic violence offense, be sure to photograph any injuries you sustained during the incident. The police will almost certainly photograph the “victim’s” injuries, but all too often will neglect to photograph the defendant’s injuries. Photos of your injuries may be the only way support your testimony, and show a jury that you acted in self-defense. Also, be sure to take photos of damaged objects or property that may have a bearing on your case.

“Domestic Violence” is a label for a type of case, it is not, by itself, a criminal charge. There must be an underlying charge. For example, the most common charges in a Domestic Violence case are:

What classifies a case as a Domestic Violence case is an intimate relationship between the defendant and the alleged victim. It can be either a present or former relationship. At trial, the prosecutor must request that the case be designated as a DV case – and then must elicit evidence that such a relationship exists or existed in the past. If it is determined that it is domestic violence, this acts as a sentence enhancer, increasing jail time – and will add treatment terms to probation such as 36 domestic violence classes (mandatory). A conviction for a domestic violence charge can also have enormous career implications, as many industries and professions will not employ those with a DV conviction.

There is a strong disposition among most people, and most jurors, that we must crack down on vomestic violence. It has reached the point of hysteria in modern times. Of course, violence of any kind is a serious social concern. The problem is, it is such a hot-button, emotional issue at this point that it creates a bias, and an anger – and a readiness to convict – at the mere utterance of the phrase “domestic violence”.

Even if the alleged victim comes forward and admits that she was never assaulted – she is labeled a “recanting victim”, and the prosecutor will still try to convict you. The prosecutor might call a “domestic violence expert” to take the stand and say that every alleged victim who now says it didn’t happen is lying – that this is a typical part of the “cycle of violence”, and that the victim is only trying to protect the accused at trial.

And yet, nowhere in criminal law are there more false accusations than in DV cases. One spouse gets angry at the other, feels powerless and futile, and recognizes that there is power in picking up the phone and dialing 911. A skilled trial attorney is able to:

I have handled hundreds of Domestic Violence cases just like yours. I have the experience necessary to uncover the truth during trial, and protect your criminal record, your reputation, and your freedom.